The 2014 winter has been sporadic and mild in the Outdoor haven of Central Oregon.  It has been great for trail running and disappointing for downhill skiing.  I talked with an older, more experienced, talented and very kind photographer today and, indirectly, he inspired me to share some winter images of Bend and the Central Oregon Area.  By the way, his name is Chuck Blakeslee.  Really good guy.

So far in 2014, snow has been sparse , skiing rocky, and worries about irrigation in the High desert climate of Central Oregon  abound. 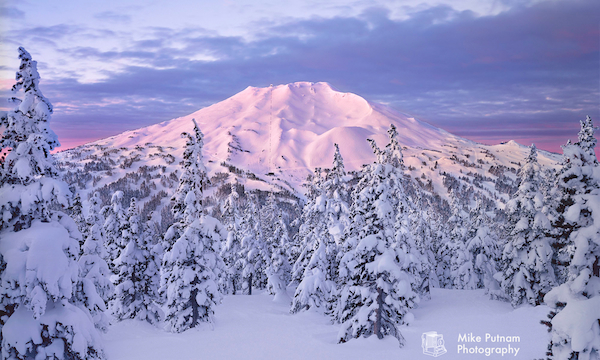 Speaking with Chuck, made me realize that the snow pack in the Sierras was exponentially worse than the Northwest Cascades, which feed the irrigation needs of Oregon and Washington. The dark side of me relishes spring weather in January yet the conscientious side of me feels depressed and saddened about the dearth of snow in the cascades and the future difficulties that the snow deficit entails.  Chuck’s information made me a bit less saddened, more hopeful, and willing to enjoy what we is available to me.  Thanks Chuck!  While the above image of Central Oregon’s beautiful Mt. Bachelor wasn’t taken this year, there is currently enough snow to ski and….. it could be worse!

Not long ago, Benham Falls on the Deschutes River, south of Bend, looked much like this.Winter Elegance.  No longer.  Currently, there is almost no snow in the Deschutes River trail area between Bend and Sunriver, Oregon. I originally captured this photo of Benham Falls while on an adventure with my wonderful daughter, Emma.  I’ve been to Benham Falls countless times and many of them while there was snow on the ground but never with such perfect snow cover as you see in this picture.  Just enough snow to cover up some unattractive under growth but not so much that the scene is a big white blob.

The next winter photo is also taken along the Deschutes River but it is an entirely different area of the Deschutes.  This photo was actually taken in Central Oregon’s Tumalo State Park.  I used to work near Tumalo State Park in a previous life but now, I thankfully work in all of the beautiful areas of Oregon.  It is a pretty good gig! 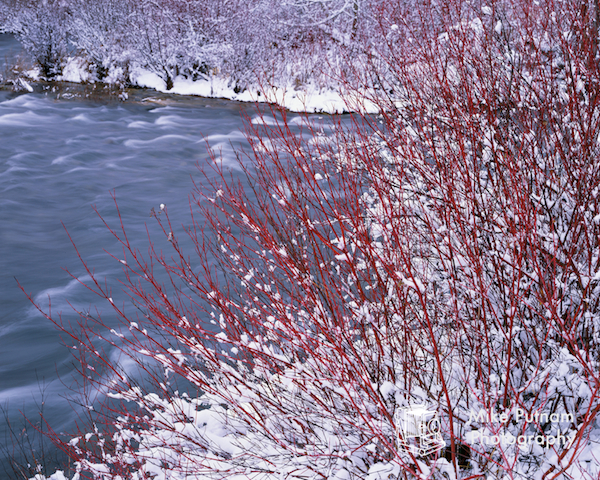 This image of snow illustrates some of the subtleties of winter photography.  When I captured this photograph, it was actively snowing wet, heavy, sticky snow.  cold dry snow would not have stuck to the branches of the lovely red osier dogwood in the foreground, making for a less wintery, less interesting image.  Temparature, timing,wind, could cover….it all matters.

The following photo of Central Oregon’s Cascade Mountains illustrates another fact about winter photography.  It is hard, harder than you think.  This image was taken from the summit of Tumalo Mountain, located near Mt. Bachelor and the town of Bend, Oregon.  Summiting Tumalo Mountain requires a 1,400ft climb.  Not Herculean but it is work.  Add in 25 inches of fresh powder overnight, a 40 pound pack, a 3:00 AM start time, and make it zero degrees outside and you have a challenge.  If and when you find an elegant snowy foreground, try getting solid footing for your tripod on top of 10 feet of powdery snow, then take your gloves off( it’s still zero degrees outside, much less with the windchill) and try to focus your camera.  Also, don’t breath anywhere near your lens as it immediately freezes, leaving a layer of frost on your expensive glass.  Not a good artistic effect!  If you manage to not get powder inside of your film plates you might actually get some worthwhile images.  I think you get the idea.  It is hard, much harder than warmer weather photography.  Well, this one was worth the effort but I don’t miss the pain of getting the feeling back in my fingers, 30 minutes after I got back in my truck and cranked up the heat.  Luckily, they did warm up and I immediately went out and bought a pair of -50 degree boots to better preserve my toes the next time out. 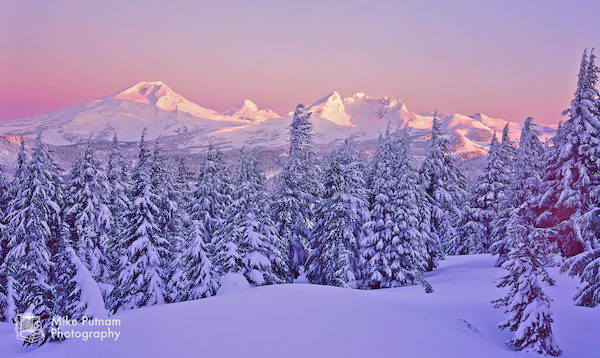 I have slowly begun to realize that I am drawn to water which is not a problem unless you live a desert.  While the Central Oregon area is technically the “High Desert”, water abounds which is part of why I love it so much in my home town of Bend, Oregon.  The following image is of the beautiful, Tumalo Falls, taken 10 miles from my home in Bend.

While this image only takes a short cross country ski from a convenient trailhead.  Snow conditions in this image were epic.  Good sticky snow, very little wind and not too much snow the block things up and subdue detail.  Once again, timing and conditions are everything in the world of winter landscape photography.  It was cold enough to have nice ice formations adjacent to Tumalo Falls, yet warm enough for snow to stick on the trees and it wasn’t snowing so hard that falling snow dulled the detail in my prints.  Quite the contrary, the detail is exceptional in this image of Tumalo Falls, one of my favorite quick getaways near Bend.

I offer one last cold winter image of Central Oregon to remind everyone of what may be ahead, unless global puts Central Oregon in a death grip for the winter.  I took this photograph of Paulina Creek, in the Newberry Crater National Volcanic Monument.  this was late in 2013, after an extended cold spell that thoroughly froze a waterfall in the monument. 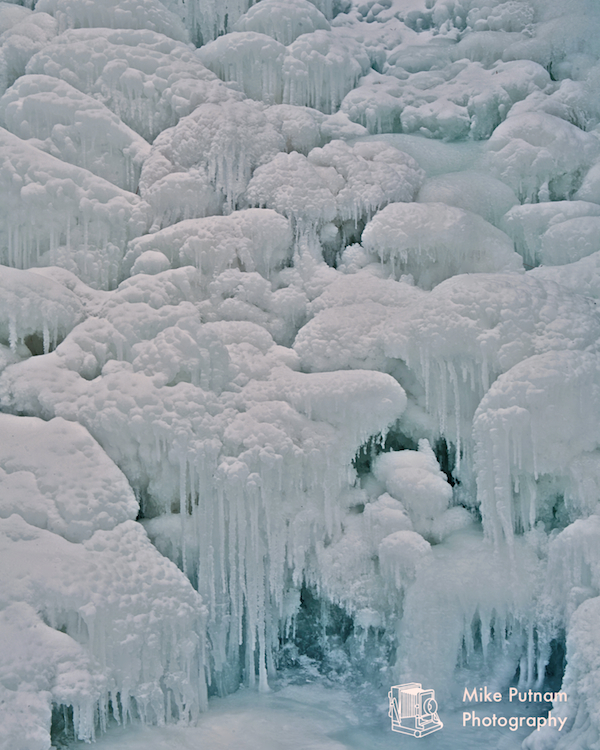 The detail was pretty stunning in the scene along Paulina Creek.  I hope my prints have half the detail that my eyes witnessed on that beautiful winter day.  T vie more of my Oregon landscape Photographs, please visit the portfolio page of my website.  It contains all of the Oregon Nature photos that I have for sale.  Oregon Nature photos for sale.