Typically, in the world of Central Oregon Landscape Photography  there is a shoulder season between Autumn and winter which can be prolonged and unproductive.  During this shoulder season, which we are in the midst of right now, I always hope for a few light snows that add texture and interest to our Central Oregon Cascades Photography.  There is a fine line, however, between enough snow and too much snow.  Enough snow allows access without requiring overnight camping and snowshoes. Recently we’ve had just enough snow.  One spot I like to visit in our photographic shoulder season is Big Lake.  It is near Hoo Doo Ski area and is beautiful any time of year.  The shoulder seasons are my favorite times of year at Big Lake because of sunsets like I recently experienced there.  Below is the first of many shots I captured that evening. 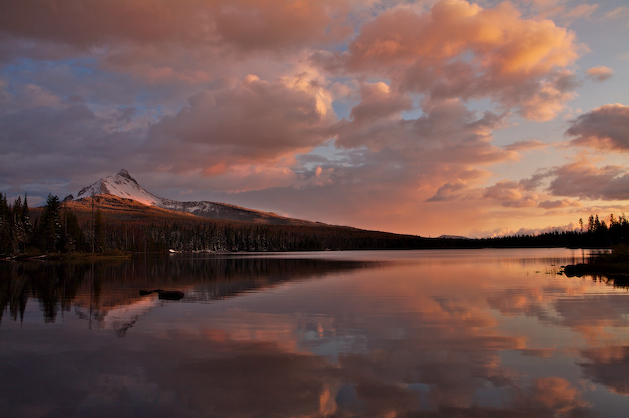 As the sun slowly faded I enjoyed the kind of light that is a landscape photographer’s dream.  The initial soft pastels hardened into more intensive and contrasty colors.  Below is a photograph taken within 10 minutes of the first, showing a quickly changing set of cloud formations. 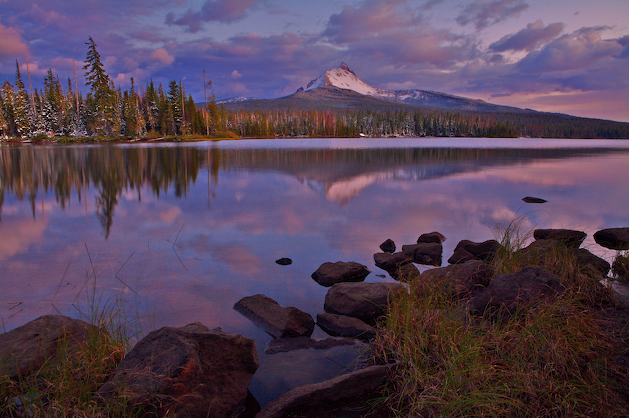 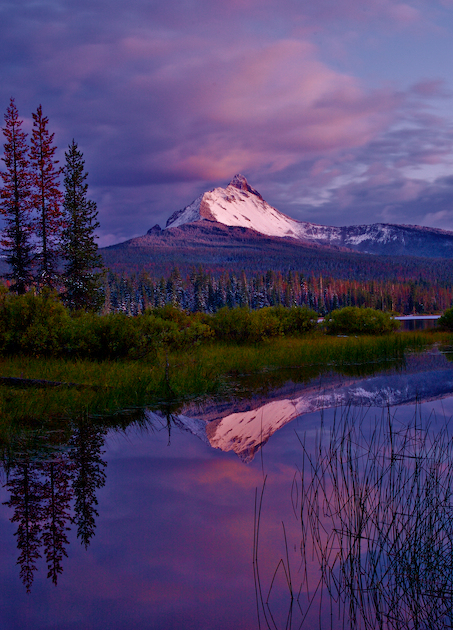 As the light faded an attractive and almost electric scene developed along Big Lake’s shore line. 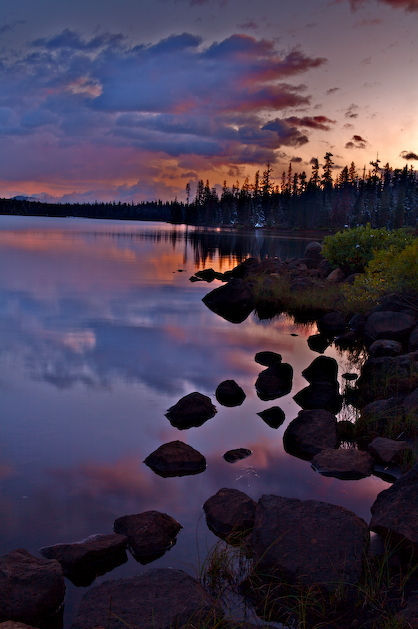 Soon after the above shot was taken, the light faded, the wind picked up and I packed up my gear and headed home to Bend after a very successful and extremely beautiful sunset.  The next photograph also falls into my “shoulder season” category.  It was obviously taken on a different evening but one that was no less beautiful than the one I enjoyed at Big Lake.  This photograph was taken at Bend’s Tumalo Reservoir.  It is one of my favorite locations for Central Oregon landscape photography for several reasons.  It is close to the city of Bend, and it offers a nice reflection of all three of the Three Sisters Mountains.  The mid ground of the following image is an area commonly known as the skyline forest. This area is privately owned and was previously known as the Bull Springs tree farm.  It is composed of over 33,000 acres and encompasses much of the area between Bend and the Three Sisters Wilderness area.  It would truly be a shame to have this wonderful area developed into a resort with the possibility of over 1,000 homes.  It would be a shameless waist of breeding habitat for elk and mule deer and recreational habitat for people.  Can you imagine the view of the Three Sisters from Awbrey Butte spoiled by a city the size of Sisters where there was once nothing but beautiful ponderosa forests?  Can you next imagine the following image spoiled by a city crowding the area beyond the the reservoir? Groups like the Deschutes Land Trust  are working hard to make sure that the cities of Bend and Sisters never have their view ruined and that valuable wildlife habitat isn’t permanently destroyed so that out of state developers can get richer.  The Deschutes Land Trust is a special group filled with great people, many who I know personally and all of whom have Central Oregon’s best interests in mind Another group worth looking into if you are interested, as I am, in preserving the skyline forest west of Bend, is the Central Oregon Landwatch.

Enough of my conservation ramblings, below is the photograph which reminded me of the struggle to save the skyline forest area. 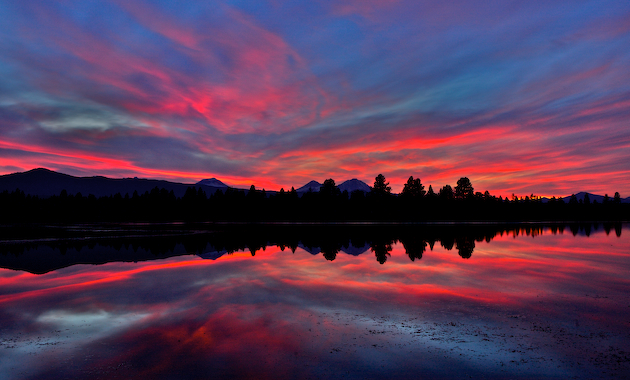 Sunset over Tumalo Reservoir, west of Bend. Just beyond the tree line is the area referred to as the “skyline forest”