One of my favorite Central Oregon Landscape photos is pictured below on the last of my new line of art cards to be introduced.  This mountain image was captured from the summit of Central Oregon’s South Sister Mountain at sunrise.  The Pink alpenglow experienced during that clear morning sunrise is one of the special things about living in mountainous areas.  As you may know, alpenglow is given it’s pink color because low level morning or evening light that first reaches the summits of high mountains has to travel through a greater amount of the earth’s atmosphere before contacting the earth surface.  Because of this increased contact with the earth’s atmosphere, many of the light’s wavelengths are filtered out, leaving pink as one of the most prominent colors in the light’s visible spectrum, thereby giving Alpenglow it’s pink color. 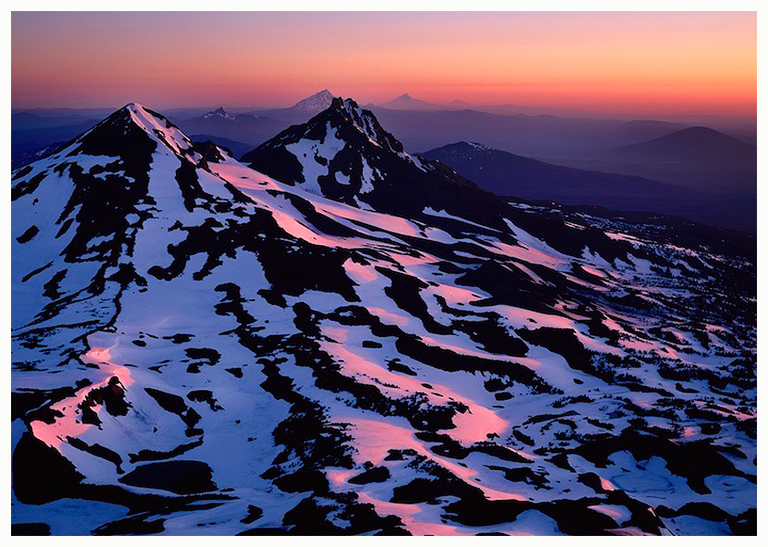 Because I love mountains in general and I especially love our Central Oregon Mountains, this is one of my favorite Central Oregon Landscape photos.  It would be  very difficult to capture a more alpine feeling landscape image in the Central Oregon area.  I’ve climbed to the summit of South Sister many times in the past.  It’s a long and difficult but non-technical climb to the summit via the Devil’s Lake or Green Lakes routes.  As it requires nearly 5,000 vertical feet of elevation gain to reach South Sister’s 10,358 foot summit, the climb is not for everyone.  Several years ago I developed what my wife would refer to as an obsession with capturing this landscape photograph.  I’ve climbed South Sister three times purely with the intention of capturing this mountain image.  On the first attempt, I started late at night and climbed for five hours only to have the summit cloud in unexpectedly, totally obscuring any photos I had hoped for.  The next time I climbed with good friend, Jake “Squishy” Bell.  We started climbing the previous evening and summited and set up camp at about 11 AM.  The next morning was frighteningly windy. It was impossible to stand still without being blown about by the wind.  The sunrise was beautiful but the photographic conditions were impossible with my large format camera.  Unfortunately, the bellows on my camera tend to act as a small sail in windy conditions.  It was terrifying to be near the summit edge, much less to perch my expensive camera near it.  I climbed down the mountain without taking a single shot.  Very disappointing!  On my next attempt, I climbed with two other people, my sisters ex-boyfriend and his sister.  There was lots of snow on the route requiring endless post holing into deep snow on steep slopes, making for a long and tedious climb.  The next morning was glorious!  No winds and the beautiful alpenglow you see in the above greeting made all of my previous efforts worth while.  The fine art version of this beautiful Oregon scene  is also stunning.  In the large 50 inch print, you can see volcanoes all the way to Washington State.  Middle Sister, North Sister, Three Fingered Jack, Mt. Jefferson, Black Butte, Mt. Hood, Mt. Adams, Mt. St. Helen’s, and Mt. Rainier are all visible making this arguably the most alpine of any Oregon Landscapes.  If you are interested in seeing this Fine Art Print in person, please feel free to contact me.  If you are interested in purchasing this or any of my other Cascade Mountain Greeting Cards, please check back in a couple of days because they are almost ready for sale!