Yesterday started a little slowly as I had more computer and billing work to do than I prefer on any free day although I hopefully closed a fine art transaction that I’ll list here on the blog when it becomes slightly more official.  My initial photo mission was to find a dry canyon outside of Sisters, Oregon, which I’d identified on a map.  My hope was that the canyon would have views of Central Oregon’s Three Sisters over the top of the canyon.  My first attempt was swiftly blocked by fate at the access road was closed due to seasonal wildlife usage.  Oh well, as I was close to Sisters, I stopped in to see Brad at Eurosports which is an outdoor store with an emphasis on bicycling and cross country skiing.  Brad was helpful as always and shared some trail information.  Next I stopped in to one of my favorite Central Oregon Bookstores, Paulina Springs Books where I got a couple of trail guides to replace my old tattered versions.  My last city stop was at Three Creeks Brewing Company, where Dave Fleming continues to churn out excellent beers.  He recently brewed a great dry hopped pale ale which has a wonderfully aromatic nose.  If you are in Sisters and you enjoy a fine microbrew, you should stop in to visit the good folks at Three Creeks Brewing Company.

As I was denied access to my intended photography location for the day I made alternate plans.  I drove the back roads to Lake Billy Chinook.  I’m not a power boater nor do I enjoy busy recreational lakes but I’m always pleased with how beautiful Lake Billy Chinook and the surrounding areas are.  By this time of day the light had gotten pretty harsh but there were some pretty interesting lenticular type clouds forming overhead.  I’ll include the following picture primarily because it shows the clouds starting to form over Mt. Jefferson, high above the basalt walls of Lake Billy Chinook. 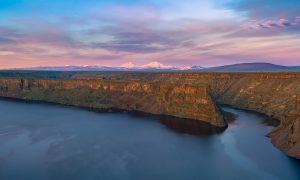 The clouds forming at the top of this picture weren’t going to work for sunset shots of the Cascade mountains but I knew they might work out for sunset shots at Smith Rock State Park near Terrebonne so I loaded up and went to Smith Rock.  For quite some time I’ve been trying to get a good sunset shot of the backside of Smith Rock including Monkey face at sunset with some good clouds as a backdrop and suddenly I thought today might be my day.

Once I’d arrived at Smith Rock I made a quick driving tour and took a couple of pictures of the Monument at the north end of Smith Rock.  The monument is an alluring subject and one with which my friend, photographer, and neighbor, Troy McMullin   has a growing obsession.  .  Below is a picture I shot yesterday of Troy’s Beloved Monument. 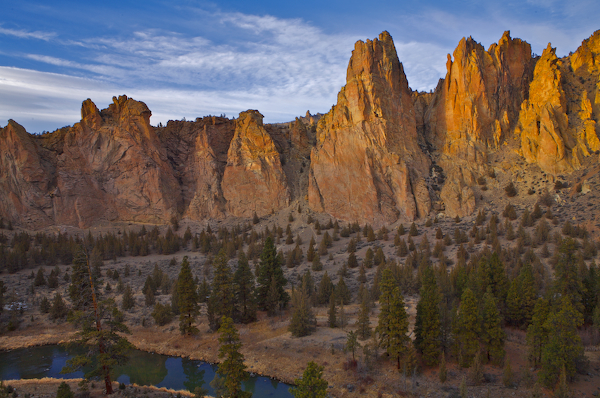 The warm golden light was nice but it wasn’t the photo I had in mind.  I quickly hiked down the overlook area and across the Crooked River Bridge and started heading along the river to the backside of Smith Rock where Monkey Face is located.  As the light was starting to fade a bit I decided to make a gamble and try a short cut over asterisk pass which is the low point along the morning glory wall and dihedrals area where you can see a cool balanced rock.  Well My short cut was a bad idea.  There are signs that clearly indicate that asterisk pass is not a hiking trail and they are accurate.  I managed, with a fair amount of struggle to get to the top of the pass but getting down the opposite side with my bulky photography pack was a risk I wasn’t willing to take for the sake of photos.   Just a warning, don’t try to hike/scramble over this pass unless you are very comfortable with some exposed scrambling.  I could have made it down the opposite side without a pack but that too would have been stressful.  The good thing that did come out of climbing to the top of asterisk pass were that I could see that the clouds were thinning out over monkey face and would no longer make for a good backdrop.  Additionally, I got to enjoy a new vantage point of a beautiful area of Smith Rock.  below is a quick pic I snapped of the morning glory wall from near the top of asterisk pass. 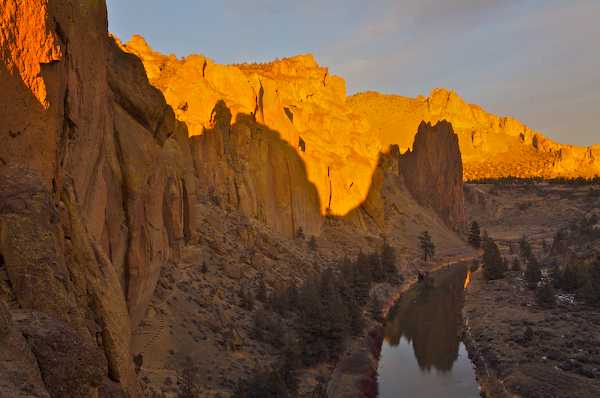 Evening light on Smith Rock as seen from asterisk pass

The light would definitely be better in the morning which gives me another photo excuse to return to Smith Rock!  Because of the changing cloud conditions, I reversed paths and quickly returned to the overlooks near the parking areas on the opposite side of the Crooked River because I thought that offered the best opportunity for colorful sunset. light.  I was right!  As I climbed along the trail to the parking area, the light really heated up and I captured the following sunset photo from near the view point overlooking the park. 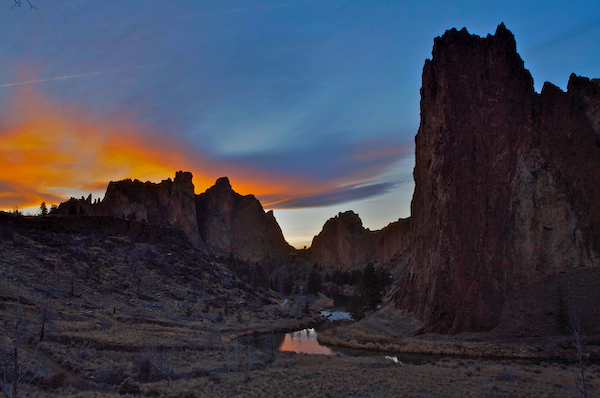 This photo alone made my day of cloud chasing worth while.  I love the composition of the sunset cloud spreading out over the distant rock formations.  Next I hustled to a slightly different location that I thought might hold color slightly longer.  The low point with the small balanced rock is asterisk pass where I had been balanced only a few minutes before.  Mt Jefferson is framed over asterisk pass in this particular photo. 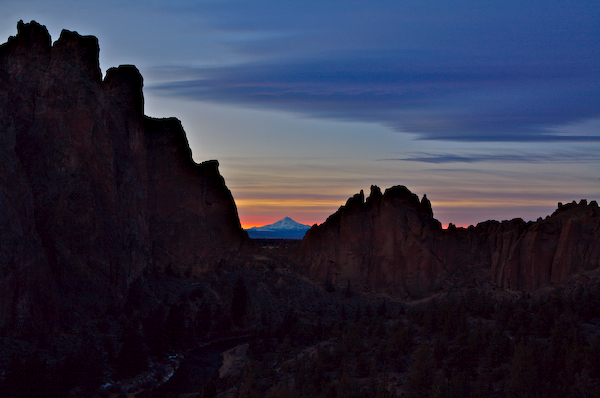 Mt. Jefferson framed above Smith Rock’s asterisk pass at sunset with the morning glory wall to the right.

This day typified many in my little world of Oregon Landscape Photography in the more adaptable I  am to environmental conditions the more successful my photos for the day will be.