Virtually everywhere I go around Bend I’ve been hearing people praying to the proverbial snow gods.  As it’s nearly December and there is only the lightest dusting of snow on our local mountains it would be good for everyone except my wife( she never wants cold or snow except on Christmas) if we were to get several heavy dumps of snow.  In terms of my photography, I would definitely like some snow to cover dormant plants and to give the cascades a more alpine look and feel.  I’ve got several exciting winter photography outings planned but no winter with which to work.  Instead of fretting over sub optimal landscape photography conditions I’ve been working on some stock photography chores on the computer.  I’d always rather be outside exploring but at least I’ve been fairly  productive while waiting for the snow to fall.  In anticipation of a late but inevitable winter, I’ve put together some of my favorite winter photos from previous years.  All of these images were captured with my large format camera which can be a bit tedious but when I get it right it allows me to make stunning fine art prints.   The first photo is our beloved Mt. Bachelor in its full winter glory, clearly not shot this year.  This photo was taken two years ago in January.  I’d been tracking weather patterns for over a week and was fortunate enough to capture this image at sunrise the morning after a 28 inch snow fall. 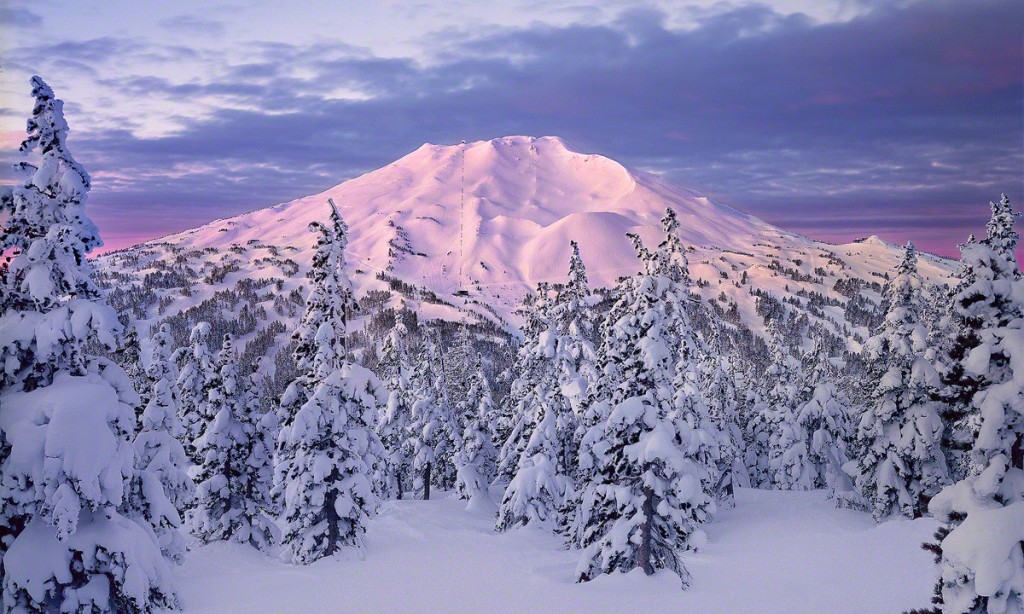 This photograph like most backcountry winter images required lots of work.  An early rise, a brutal snow shoe up Tumalo Mountain through deep snows with a heavy camera pack while the thermometer reading hovered at zero degrees fahrenheit.  Getting to a winter shot is only part of the battle.  Finding a level spot to set up a tripod so that it doesn’t sink in the snow is always a difficult task.  Snow blowing onto my lens and leaving fuzzy areas on my images can be disastrous.  Accidently breathing on my lens is inconvenient at best as it takes a bit of time before the haze will clear and if its too cold, my breath freezes on the lens making my photos look like they were shot through an opaque shower door.  Not Good.  Finally there’s the frustration of the visual qualities of snow itself.  If I can’t get to snow before its been exposed to the sun, it is virtually never visually attractive.  Here in Central Oregon, it is often sunny right after a storm, melting the snow and making unsightly bare patches contrast unattractively against still snow covered areas.  Essentially, if you want a really attractive winter landscape photo you need to be there right after a fresh snowfall and hope the wind hasn’t already blown the snows off of the trees in the area you want to shoot.

I love alpenglow photos like this one because I like color in my images and because they are a reminder how how special it is to spend time in the mountains.  Where else can you get two free and beautiful light shows daily,  courtesy of Mother Nature?

The following image was logistically simpler but still had its difficulties. 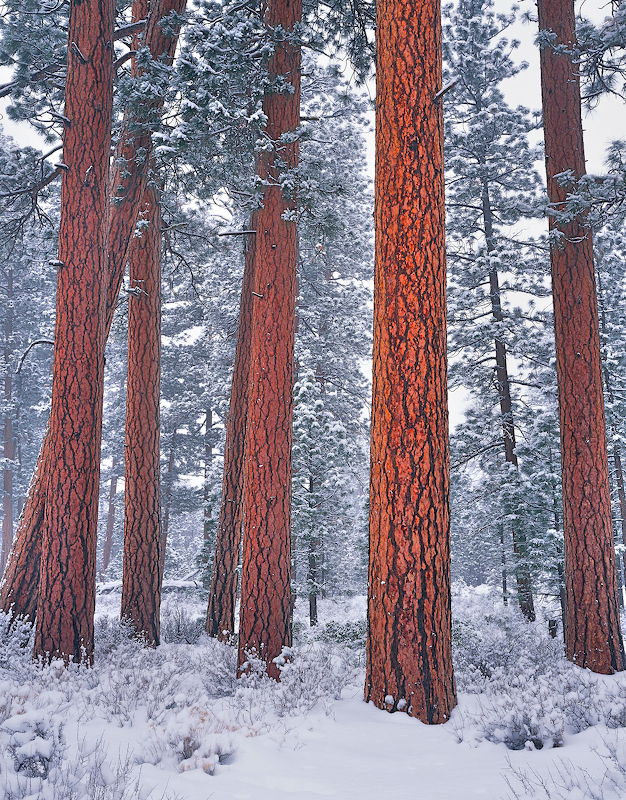 I was fortunate enough to get to this, my favorite grove of Ponderosa trees during an active snow storm.  During my extensive scouting trips around Central Oregon, this is perhaps the most colorful group of ponderosa trees I’ve found and as a bonus they have a nice composition.  If you live around ponderosa trees you’ve probably noticed that they are not all created equal.  Some have considerably more reddish color to their wonderful jigsaw puzzle bark than others do.  I have a theory about why this is.  It seems that the more colorful side of any given ponderosa tree is virtually always the side of the trunk that is more slanted toward the ground and therefore more sheltered from prevailing weather patterns.  It just so happens that all of these ponderosas had a slight tilt towards where I was shooting from and therefore they all have exceptionally colorful bark.  Because the snow was actively falling while I was capturing this scene, the foreground was well covered giving this scene a very wintry feel.

The next photo is of Benham Falls, on the river trail, near Bend.  It was taken immediately after a heavy early season snow storm.  My daughter, Emma was with me on this adventure, like many of my other photography outings.  There are several things about this photograph that are special in my opinion.  First, the fresh snow allows for a wintry look, like all of the winter photos I am especially proud to have taken.  I love the flow patterns of the Deschutes, the icicles draped off of the rocks along the river’s shores and the heavy snow laden evergreen branches sagging under their new found burden.  I think this image 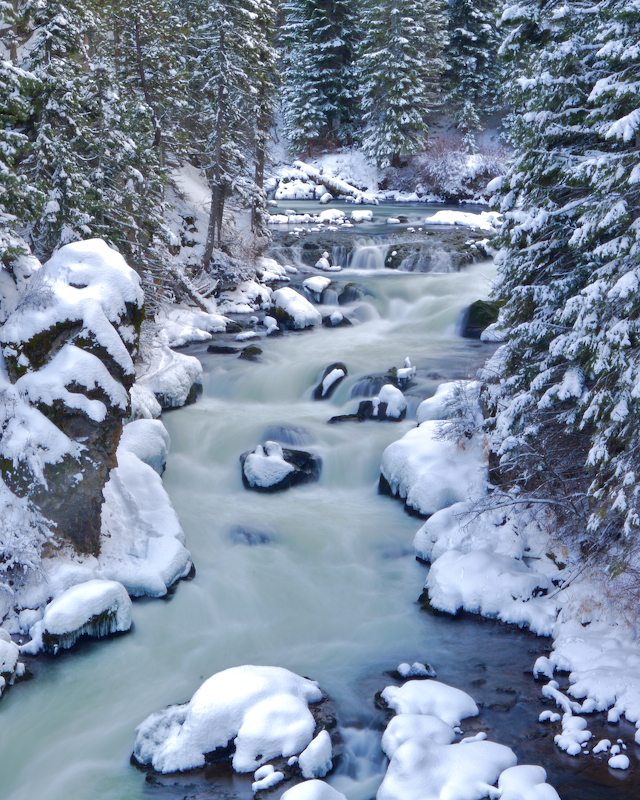 will make an excellent fine art print because of its various patterns and textures.

The next image in this small snow dance collection was taken in Tumalo State Park, and once again, it was taken immediately after a heavy snowfall giving the vibrant red osier dogwood in the foreground an attractive texture of winter.  While this is a simple image, I still enjoy the composition and angles created by the silky waters of the Middle Deschutes River in the background and the ruby glow of the foreground dogwood. 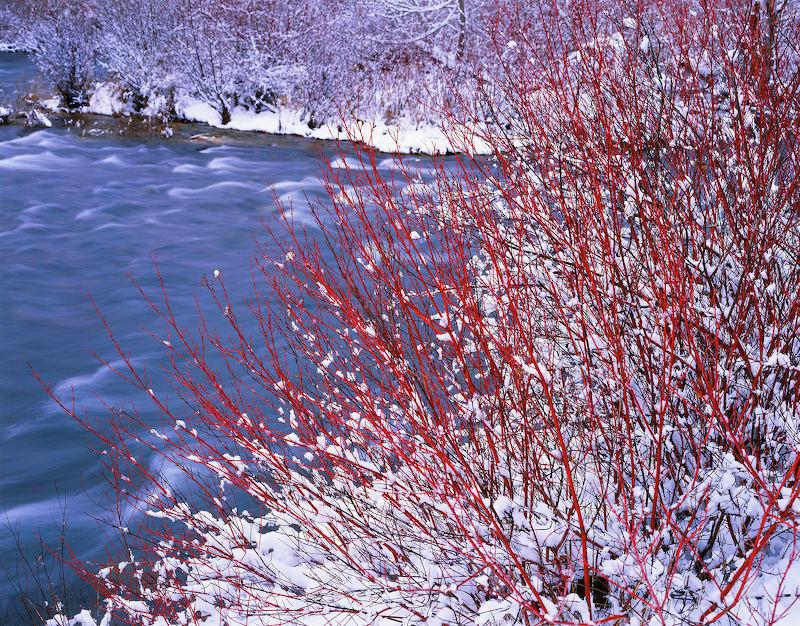 Granted, this is a small collection of winter images but hopefully it will give some hope to those of you who crave fresh powder on Mt. Bachelor until Mother Nature can finally answer your prayers for snow.