It appears that old man winter has finally arrived in full force on the Central Oregon scene.  I received a mixed reaction when I declared that Central Oregon residents were in need of a cold snow infusion two entries ago, in that perhaps there aren’t as many snow lovers in our midst as I had once imagined.  Personally, I love distinct seasons.  I wouldn’t mind spring being a little more distinct and prolonged here in the Bend area but I have no reservations in regards to winter’s arrival.  In celebration of our recent snowfalls, I strategically made my first cross country ski outing of the season to Tumalo Falls.  I knew it had been quite cold and enough snow had fallen to make a potentially interesting photo or two.  I’ve been to Tumalo Falls in winter many times in the winter but frankly I’ve never really dialed in the scene to the point where I’m truly proud of my photos.  This outing was very good but far from perfect.  It was a day that my friend and fellow photographer, Troy McMullin refer to as a good stock day.  By this we mean that the conditions or the setting might not have been appropriate for capturing a fine art photograph that is worthy of selling as a print but it was probably an attractive enough scene that is has some commercial value.

In early season conditions like this, one often has travel options.  The road from the parking lot along Tumalo Creek had enough snow for skiing but it had little enough that it was still hikeable.  Probably the only way to go wrong was to snowshoe.  I had enough kick and glide that the weight of my skis were easily justified.  After the quick 2.5 mile ski into Tumalo falls, my first stop was at the viewpoint where I took the following wintry picture. 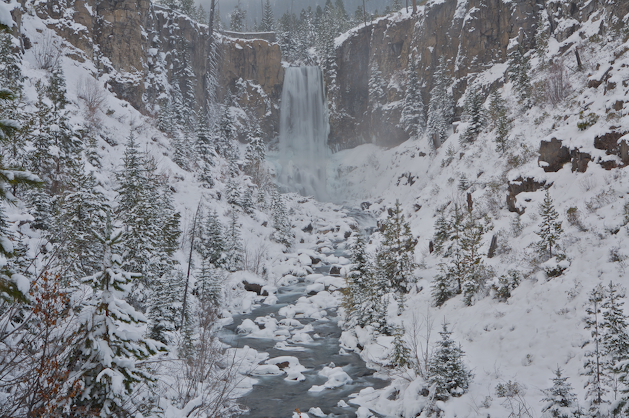 The attractive elements of this image led me to my next several shots.  I like the snow cover on the trees and the rocks in the middle of Tumalo Creek but I am especially fond of the ice formations at the base of the waterfall.  Their artistic shapes and blue hues made them a subject worth zooming in on a little closer.  any good photographer will tell you that it is better to get closer to your subject that to employ a lens with a longer, so I got closer.  I dropped my skis and skirted along the right hand side of the creek’s canyon for a more intimate vantage point.  The travel was actually more hazardous than I’d anticipated as some of the steep snow laden slopes were a bit nerve racking.  Looking down I realized that one slip and I slide 75 feet straight into the creek which would be uncomfortable but not devastating.  What would be devastating was the fact that I was potentially the last person into the falls that evening and that I could possibly break my leg during a slide into a creek.  It is moments of exposure like this that trigger my mind to draw out dark scenarios of my own dismemberment that at worst are melodramatic and at best are preventing my wife from cashing in on a life insurance policy! 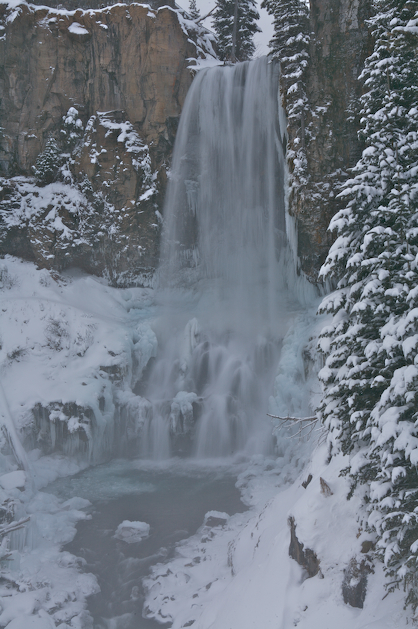 As I was fussing with optimal tripod placement and being covered with fresh fallen powder, I became acutely aware that i was getting cold!  I like the details of the falls and its associated ice formations that are captured in this picture.  When I tried to hike/climb/scramble I ran into two issues.  The hillside became intimidatingly steep for someone(me) who isn’t ready to cash in their own life insurance policy and  the spray from the waterfall became problematic for my lenses.   The next image emphasizes the Ice sculptures beneath a tad more aggressively. 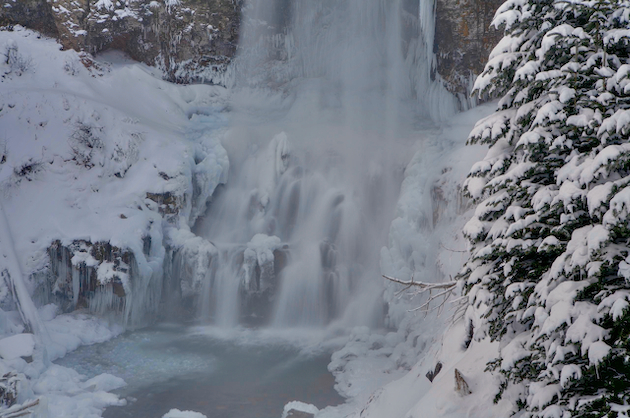 Hopefully this will be the first of many winter photo outings that I’ll make this winter season.  It was great to be back out on skis and I’m glad winter has finally arrived despite the wishes of my  loving wife and my favorite ultra-marathoner/retailer.  By the way, my wife will have to wait awhile for summer and to cash my life insurance policy!