As our daylight shortens,  the colors fade and hard frosts glaze my lawn nightly, I submit that Fall, perhaps my favorite season has officially come to an end.  I would argue that autumn os our most under rated season in the High Desert of Central Oregon.  The core of Bend is awash in the yellows and reds of maples and the oranges of mountain ash.  Riparian zones along the Deschutes River are ablaze with the reds of red osier dogwoods and the yellows of alders.  The Santiam and Mckenzie Rivers  are second to nowhere for the intensity of their vine maples.  Anyone who has driven over Santiam Pass in October can attest to the splendor of lava fields aglow with vine maples in full seasonal regalia.  I’ve put together a small collection of images celebrating the autumn color of the Central Oregon area.  Some of these images were captured in previous years while some were just weeks ago.  For emphasis, I’ll take you on a virtual road trip, leaving from my front door.  We’ll wonder a couple blocks away to Bend’s pride and joy, Drake Park and Mirror Pond.  I rarely take photos of scenes that have houses or obvious indications of human habitation but for Mirror Pond I make an exception.  When My wife , Debbie and I were planning on leaving the East coast, I stumbled upon a Bend Chamber of Commerce website with Mirror Pond as it’s lead shot.  I was smitten!  Imagine glaciated volcanoes framed by huge Ponderosa pines edging the wild and scenic Deschutes River right in the heart of Bend’s downtown area.  Wow!  I knew where I wanted to live.  Below is an autumn sunrise shot from the location that sold me on Bend. 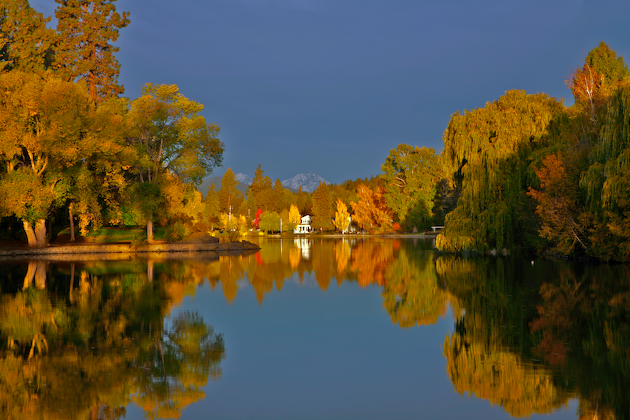 From Bend we hop into our fuel efficient hybrid vehicle (this is Oregon after all) and head west on highway 20 towards the storied Metolius River and the quaintly rustic town of Camp Sherman.  Below is an image I’ve never published before.  I enjoy the Ponderosa trees that partially define the Metolius basin and the golden fringe enhancing the rivers elegantly curving shores.  I’m going to paraphrase a section I read from a fishing guide about the Metolius River which I think also applies to photographing the Metolius basin.  “If you can’t enjoy time spent in exploring the Metolius, you have no soul.”  Perhaps a bit extreme but people who are fortunate enough to have spent time along the Metolius’ shores will admit that it is a truly  special place whether fishing, photographing or exploring. 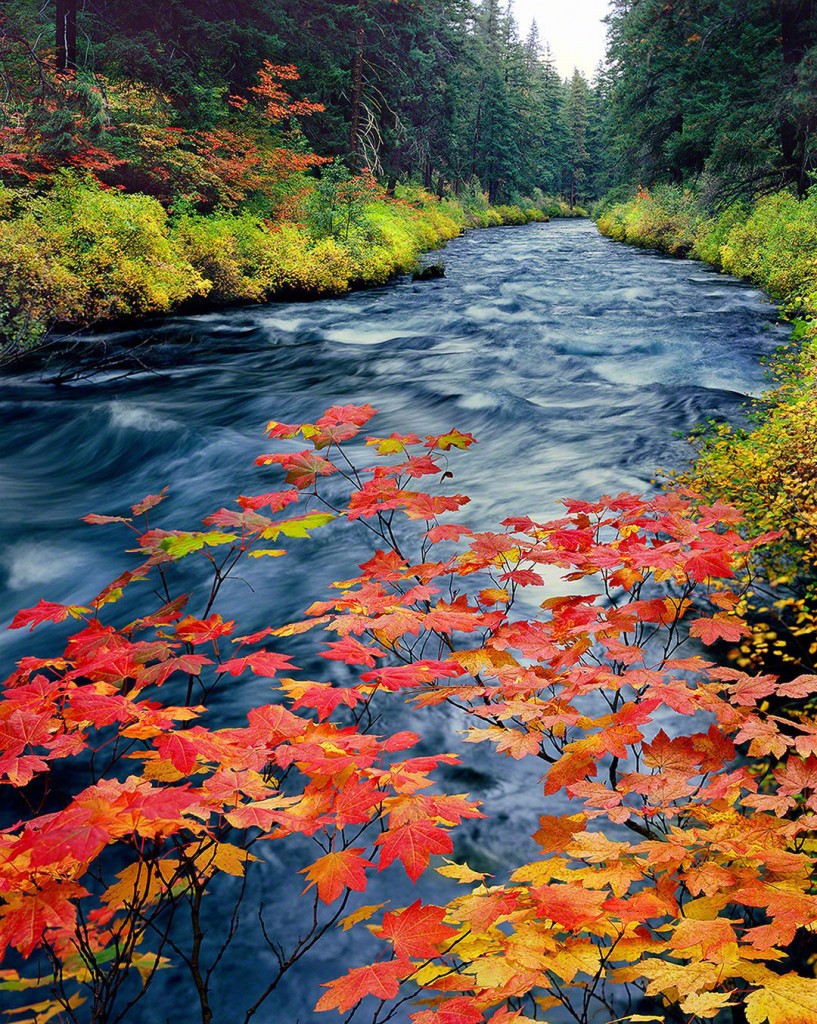 Next we continue west over the lava fields of Santiam Pass and down to the diminutive community of Marion Forks.  The following image is from the shores of the North Santiam River slightly west of the cascade crest.   I love the strong vertical pattern contrasting with the technicolor display. 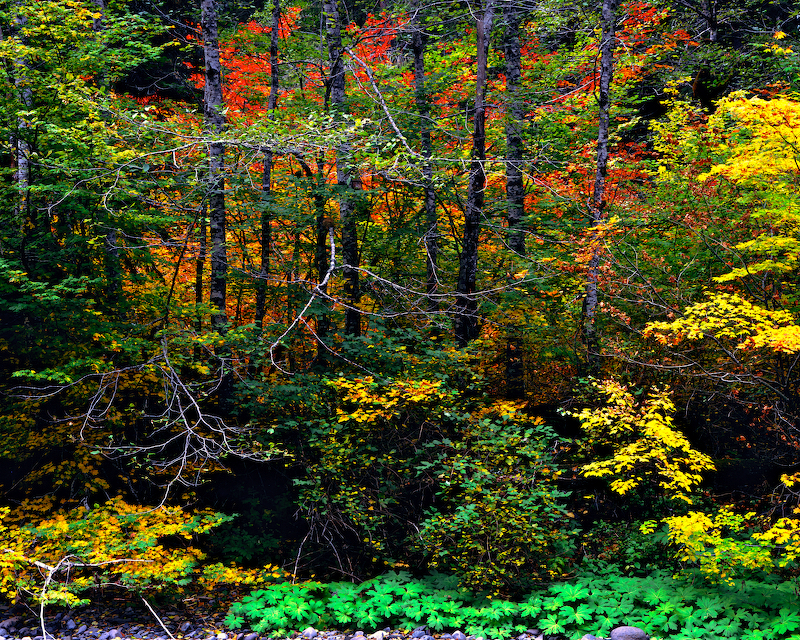 Autumn colors and patterns along the North Santiam river

The following image is also along the Santiam River.  I make an annual visit to this vine maple and its double layer effect.  One layer of varied color and literal layers of branches gracefully extending beyond the river’s banks.  There’s something about this expressive tree and its gorgeous annual display that always makes my return visits worth while.

Expressive vine maple overhanging the banks of the North Santiam River, in the Oregon Cascades.

Next I move along to the McKenzie River and one of my favorite autumn scenes.  This image is also about texture and color.  It was an amazing view and made a wonderful fine art print with its combination of delicacy, vibrancy and and compostion.  I love the flowing feel offered by the moss streaming down upon  the vine maples akin to the rain that gently fell upon me as I captured this image.  I returned to this location four times before I found the desired synergy of color, texture and light. 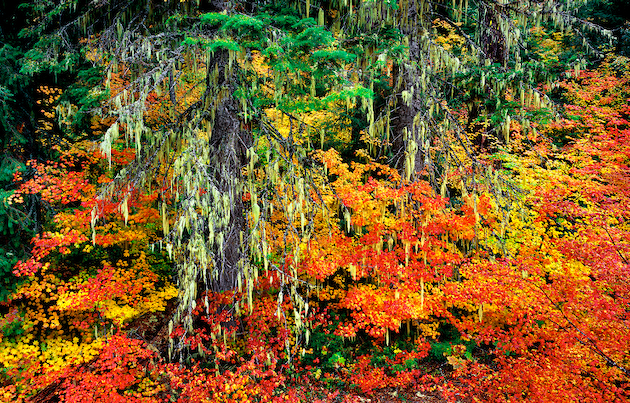 Vine maples in autumn adornment merge with cascading moss in the Oregon Cascades.

Next we proceed to Scott Lake, near McKenzie Pass.  Every year the Huckleberry bushes along the Lakes shore put on a display that is muted by the drama of the distant snow-covered cascade mountains . 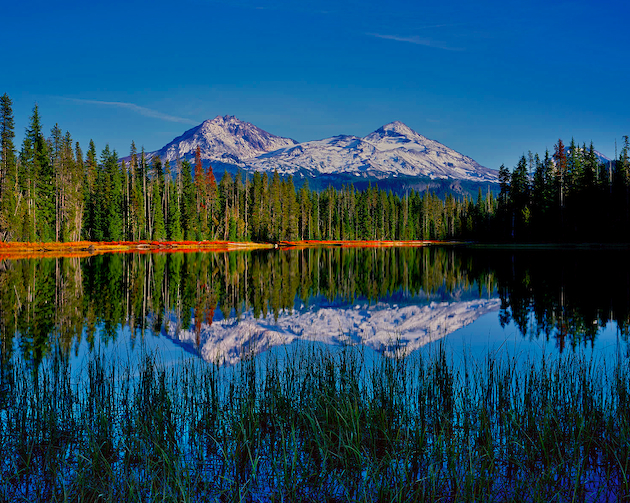 Now traveling east, we pass Belknap Crater the martian-like lava flows of McKenzie Pass and make a quick stop at yet another surreal alpine scene.  the following image is a jumble of textures and color as Huckleberries, Blueberries and willows intertwine in front of a lodgepole pine tree audience. 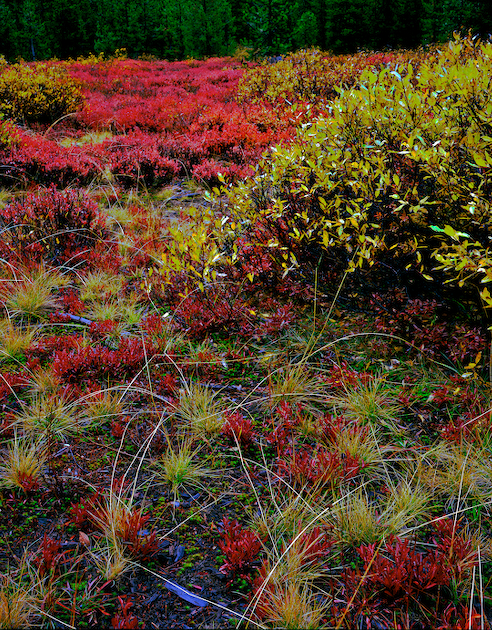 blueberry, huckleberry and willow mix in an alpine meadow near McKenzie Pass.

Now we progress back toward the town of Bend stopping just shy at Tumalo State Park, one of my formerly secret autumn locations.  On certain years, like the one from the image below, the color can be outstanding and the scenery is always pleasant , even in less than optimal years. 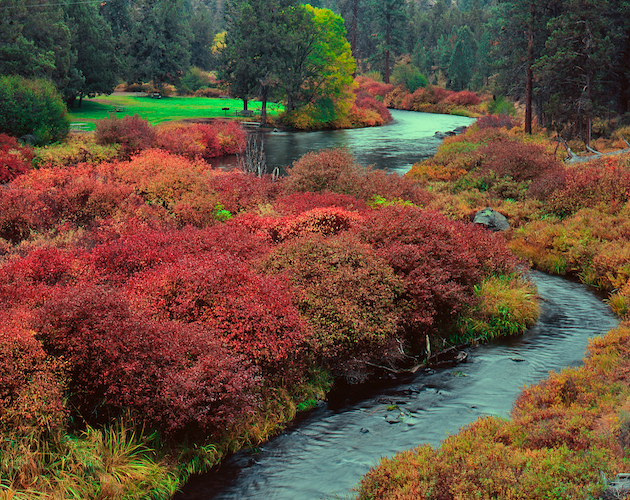 Passing through my beloved city of Bend, we now turn west on Galveston street and turn west towards Tumalo Creek.  The following image was taken with cutest and sweetest assistant possible, my daughter, Emma.  It was raining hard and I fought with water spots on my lens for quite some time before capturing the silky flow of Tumalo Falls and the pastels hues of the surrounding riparian environment. We got drenched but I got the shot from an Iconic Central Oregon location. 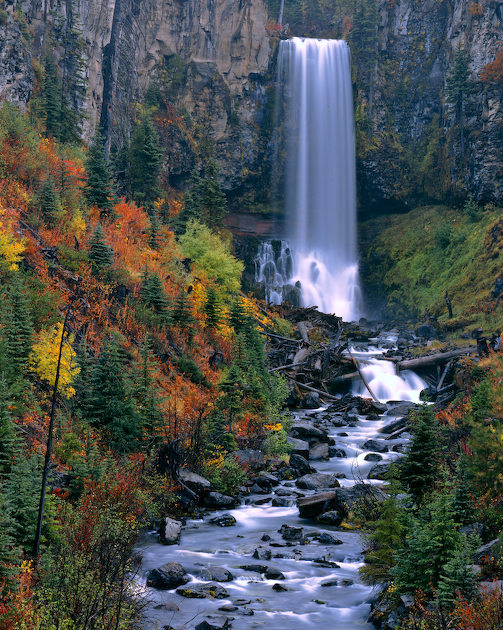 Finally, we meander down to the Deschutes River and its famed River Trail where I captured this image of the river in full autumn color.  I recently licensed this image to Orvis, the fly-fishing company for use in one of their stores.  I love the color, the flow patterns, and the lava background which in part helps to define this special area of the world that I call home. 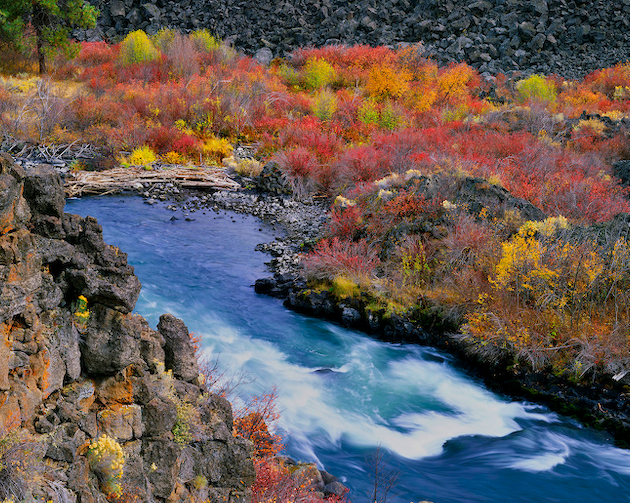 It should be understood that I did not capture all of these images in the same year, much less the same day.  Having said that, this trip can easily be taken in one day and beautiful color can almost always be found somewhere along the way in the month of October and early November.