As Old Man Winter has thoroughly put his stamp on Central Oregon, my preferred backcountry photo locations become less accessible and even simple hikes can become a difficult task.  With nearly a foot of snow in my backyard, conditions are excellent for some great winter photos, of locations that would otherwise be photographically unworthy.  As there doesn’t appear to be a break in Central Oregon’s pattern of snow storms and heavily overcast skies in the near future, I’ve temporarily given up on any mountain alpenglow and fresh snow shots for the foreseeable  future.  Instead I’ve turned towards some less remote scenes for some interesting winter pictures.

On overcast, snow days like today, I usually find some worthy photo material at Tumalo State Park.  As Highway 20 descends into the Deschutes River’s basin, on the left side of the road is an attractive overlook where you can get an arial view of the northern end of Tumalo State Park and a graceful curve in the Deschutes River.  On rare snowy cold days like today, when the riparian area along the Deschutes’ shores are powdered with fresh snow, the scene is especially elegant because the juniper and ponderosa trees retain extra detail from the snow on their limbs and the snow covers some less attractive areas in the state park area.  The following photo was taken from that unmarked but very pleasant location. 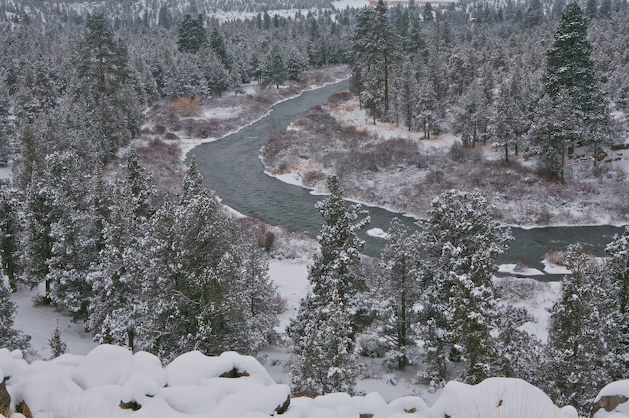 Upon entering the state park, I was rewarded with solitude and some of the best winter and snow scenery in the Bend, Oregon area.  I made first tracks in the freshly fallen snow and thoroughly explored this beautiful Central Oregon location.  I took pictures from all over the park but I’ll only present a few of my favorites in this blog entry.  I think these photos will be great for stock photo purposes.  As I stumbled up stream, I made an obligatory stop at my favorite ponderosa tree.  It’s broad limbs were predictably snow covered making an interesting, graphic picture.  This tree is absolutely immense and the density of the arrangement of its branches make it one of my favorite oregon photo subjects. 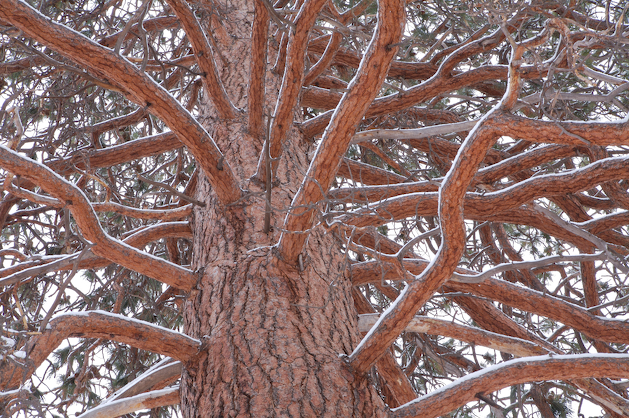 Further up river more rewarding winter photos were to be found.  The red osier dogwoods along the Deschutes River’s shores add a splash of red to the scene as do the trunks of numerous ponderosa trees along both banks of the river.  Near the southern end of the park is a broad and rugged boulder field filled with volkswagen sized lava rocks.  This boulder field is tedious to navigate in summer and it turns out that it is fairly treacherous when snow covered.  The following photo was taken at the up stream end of the boulder field. 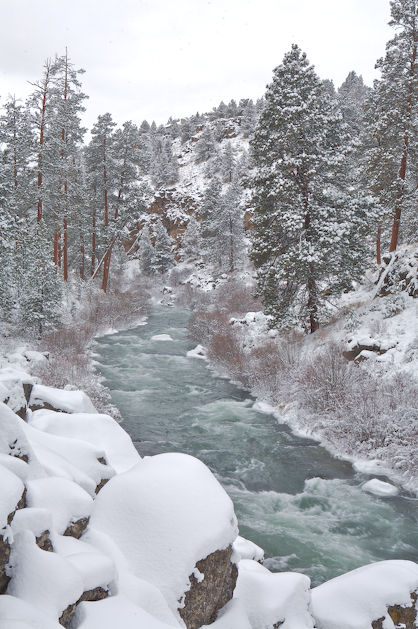 Because these boulders were snow covered many cracks and concave areas were hidden, making the travel especially difficult.  I spent a considerable amount of time on my belly grasping at small slippery hand hold in an attempt to not fall into any of the snow covered cracks that served as trap doors between the large rocks.  Frankly, I wouldn’t recommend traveling through the rock field to others.  Instead I would recommend climbing up hill above the rocks if you insisted on pressing up stream beyond this location.  The next photo is from just beyond the boulder field.  I really like the graceful curvature that the deschutes makes in this location and I love the color lent to this beautiful winter scene by the ponderosas and red osier dogwoods that flank the river. 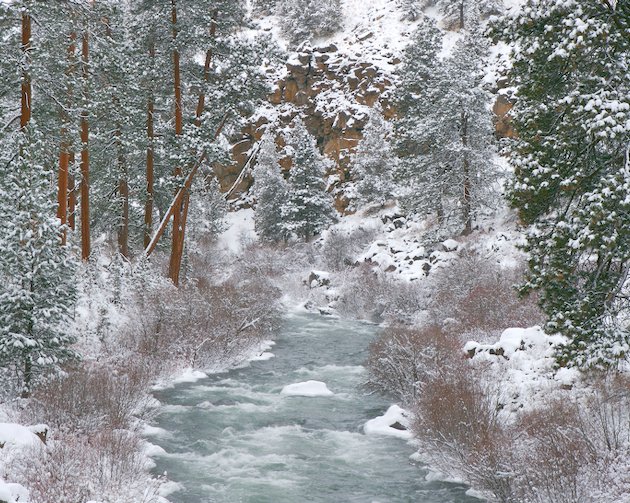 I stopped my hike at the point where the above picture was taken and began a cold and hasty retreat back to my truck.  For those of you who enjoy winter hiking, Tumalo State Park is beautiful right now.  The snow cover has made an already beautiful hike even more stunning but I would highly recommend avoiding the snow covered boulder field as it is challenging and quite dangerous when snow covered, like now!