This beautiful image of Sparks Lake is one of several new Prints about which I am very excited.  While this is a fairly simple and elegant image, it required a great deal of work.  As is often the case, I needed to make several trips to Sparks Lake in order to perfectly time the blooming of these wonderful columbine in the lower left of this image.  Because this scene is off shore, I had to borrow my friend Troy’s kayak to get to this location.  I’ve taken other images of this scene in previous years but the columbine were especially beautiful this year.  After paddling to this location, in the dark, I began setting up the shot in anticipation of the rising sun and I was pleased to note that it was a virtually windless morning, making for a beautiful reflection of South Sister in Sparks Lake. Morning Elegance, South Sister from Sparks Lake 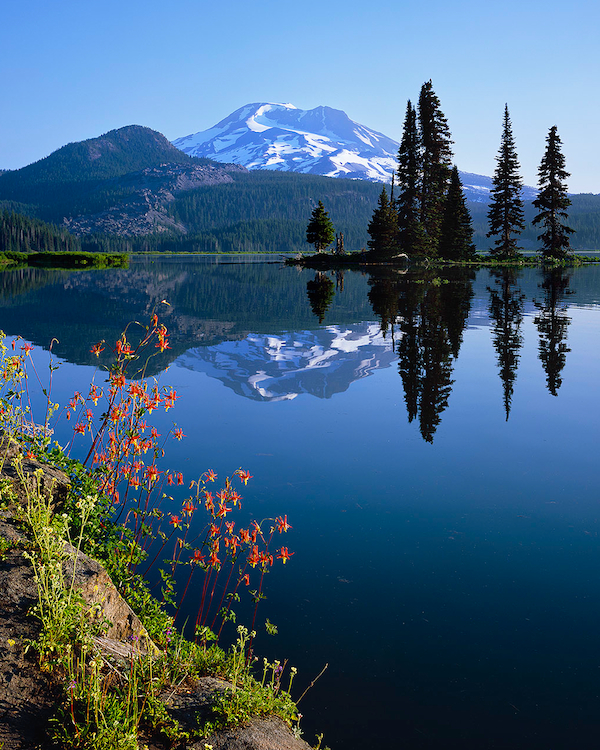 Sparks Lake is always a beautiful location but this morning was especially rewarding.  While I waited for the sun, I heard what sounded like a large dog jump into the water right behind me.  I nearly leaped out of my skin.  Initially I was terrified, a feeling that was quickly replaced with dread.  I knew if a dog was jumping in the water the beautiful reflection of South Sister in Sparks Lake would be lost.  I turned to find the offending dog and it was gone and in its place was a pattern of huge ripples heading my direction.  Perhaps the dog was actually a large rock that had disrupted my reflection.  At least it was gone.  Moments later, the splashing dog returned , no more than 10 feet away from me, except the dog was actually a huge otter!  I sat mesmerized while the happiest creature in the world splashed, flopped and fished in my general vicinity for at least 5 minutes!  Eventually otter moved on leaving me to compose this stunning scene.   I took several different exposures of Sparks Lake as the sun began to rise  and I eventually achieved the wonderful feeling of knowing that I had gotten the shot I was after.  Contented, I began to pack up my camera gear when an enormous bald eagle landed at the tallest tree in the middle of this image!  I quickly loaded my film holder, captured one exposure from my large format 4×5 camera and the bald eagle flew away!  Did I get the shot? was he holding still enough?  I had to wait for what seemed like an eternity before I got my film back to realize that I did get the shot I was after with the amazing bonus of a bald eagle posing elegantly in the perfect spot!  Phenomenal!  While the eagle is small in this image, it will be visible in the larger print sizes that I offer.  while Sparks Lake is always amazing, this time I just got lucky!