I’d only read about Thor’s Well, an amazing natural water feature located at Cape Perpetua on the Oregon Coast until about two years ago.  It is surreal, to say the least.  Thor’s Well is essentially an oversized ocean blow hole.  It is a large hole in the seaside rocks that is filled from underneath by surging Pacific Ocean swells.  When the tide is high, Thor’s Well over-flows, briefly forming a boiling cauldron, before emptying back into the ocean.  As the cauldron empties, a wonderful flow pattern forms as water descends down through the Well and back into the Pacific Ocean.  It’s this drainage that makes the magic! To view a larger version of this beautiful part of the Oregon Coast, Thor’s Well. 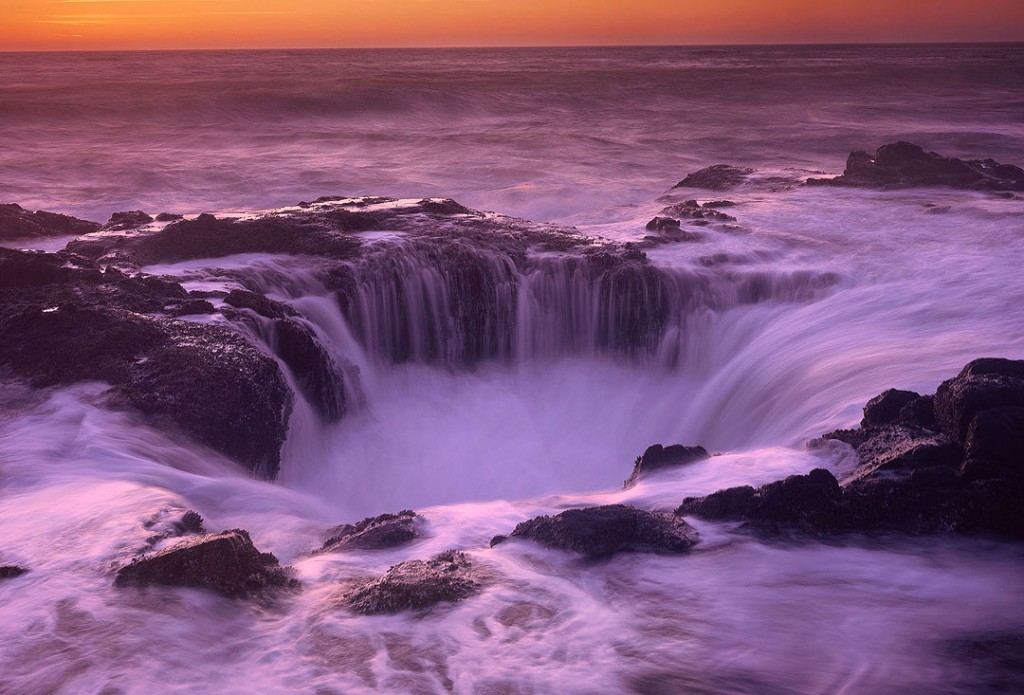 Thor’s Well is located on Cape Perpetua, near Yachats on the beautiful Oregon Coast.

The evening I captured this new fine art print, the wind was absolutely blasting on Cape Perpetua and, honestly, the photography conditions were pretty miserable.  I planned my efforts around sunset and hopefully high tide.  When I arrived, several photographers were already stationed around the lip of Thor’s Well and I sidled up to join them.  The only real tripod locations are on a raised lava shelf which is very irregular and very unforgiving.  Fortunately, I found the shooting angle I’d envisioned and didn’t have to crowd other photographers too badly.  As the wind nuked through the scene, it repeatedly sprayed salt water across our faces and….camera gear.  I must have been a real comedy to observe.  As is often the case, I was the only one shooting a film camera, much less a 4×5 film camera with enormous flapping bellows, which tried to serve as a kite in the ferocious pacific wind.  On three separate occasions, the wind blew my camera, lens and tripod over as I stumbled across lava to catch it just before my fellow photographers had a chance to see a grown man(me)cry!  I was fortunate and determined.  As daylight passed and the sun set just below the pacific, the other photographers packed and left, I gladly stayed a bit longer to capture this new fine art photograph of Thor’s Well.  The photography Gods gifted me with the most windless exposure when the light over Thor’s Well was the warmest.  The Detail in this new fine art landscape photograph is exceptional. To view purchasing information for this beautiful photograph of the Oregon Coast, Thor’s Well.   I’ll be unveiling it during the First Friday Art Walk(10/2/2015) in Downtown Bend.  As is often the case, I will be located at Patagonia@ Bend, 1000 NW Wall Street.  Please stop by to see me and this beautiful new fine art photograph of Thor’s Well, this Friday at Patagonia@Bend!

Hope to See You There,