I’m excited to announce that I will have a few new Oregon Landscape Photographs available to the public for the very first time at my usual art haunt, Pandora’s Backpack (the Patagonia Store) on Bond Street in downtown Bend, Oregon.  Art Hop should kick off at about 5pm and should wrap-up at about 9pm.  If any of you are in the vicinity, please stop by, say “Hello” and check out my new work.

Below is one of my new images which will be unveiled.  It features Three Fingered Jack Mountain in the Central Oregon Cascades and a beautiful little alpine stream. 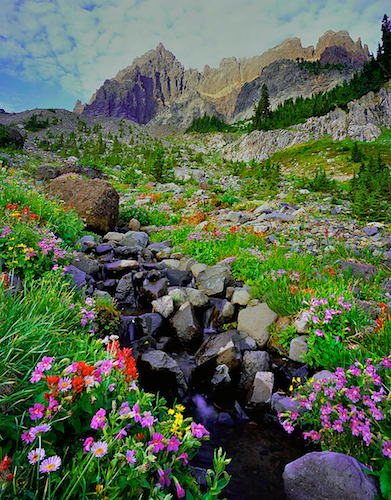 Lots of alpine wildflowers, live water , a cool local mountain, early morning light and interesting clouds help to make this image a winner.  I captured this photograph while on a backpacking trip with my wife and daughter this past summer.  It is a little bit painful to admit that the summer is in fact past!  Here is a link to a previous blog entry bout our trip to Three Fingered Jack and Canyon Creek Meadows.

Below is an image of Smith Rock State Park’s legendary  “Monkey Face” formation.  It is an iconic and stunning rock tower recognizable to rock climbers around the world and hikers around Central Oregon.  This is another Photograph that I captured with my 4×5 large format camera this past summer. 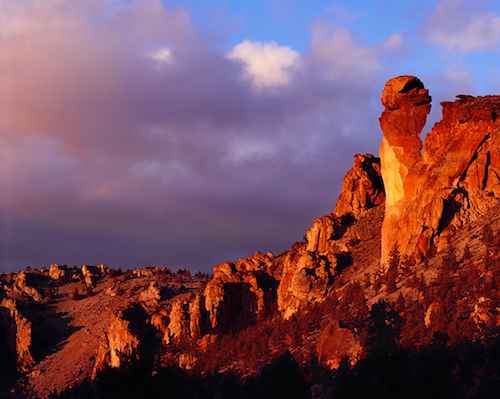 Great sunset light and a beautiful cloud grouping will make this a special fine art print for those of you who are rock climbers and hikers of Smith Rock’s famed trails.

The last of my new images is from the crown jewel in the Bend, Oregon Park system, Shevlin Park.  I often run in Shevlin Park.  It offers several great trail runs/hikes which you can learn more about here. Shevlin Park trails.  While I’ve always considered Shevlin Park an gorgeous and special place, I’ve had little photographic luck there until last autumn when I captured the following image which I’m thrilled about. You might even say that I’m as excited about this image as my daughter Emma is about picking out new school clothes, which is saying a lot! 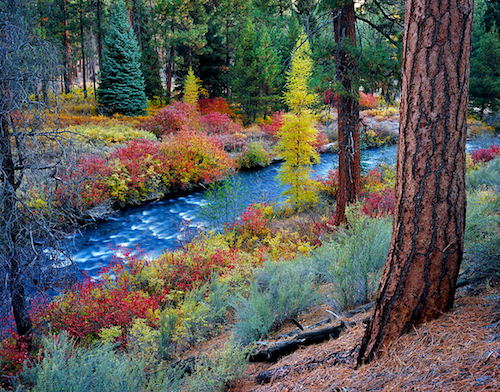 Photograph of Shevlin Park in Autumn.

This image captures several things about Shevlin Park that I love.  Riparian environments,fall color,old growth ponderosas, larch trees,and Tumalo Creek are all embodied by this beautiful image!  For a few more fall images from Shevlin Park, you can visit the following blog entry.  Shevlin Park.  I hope you all enjoy it and I hope I  to see some of you Friday, October 2nd 2009 at Pandora’s backpack in downtown Bend!