Hiking season is upon us in Oregon and with this seasonal evolution, should come some caution.  The first  areas in Oregon to reward hikers are of low elevation.  Low elevation riparian areas, specifically in the high desert regions  of Central and Eastern Oregon are home to the indigenous Western Rattlesnake which tend to awake from their winter somnolence in Early May. 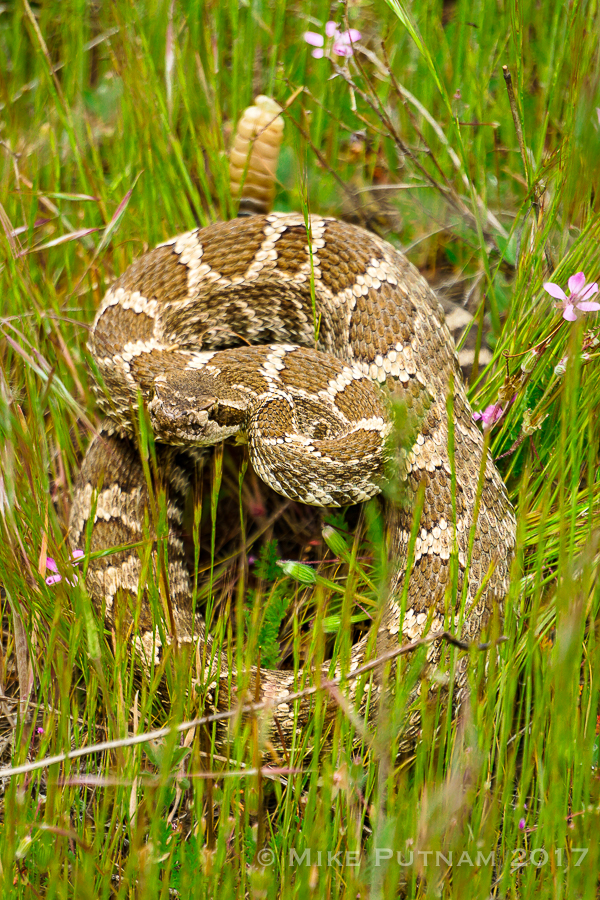 As a child, I grew up in a snake filled part of the US.  I had a law-mowing business which made me cross paths with snakes on a daily basis. In general, snakes don’t bother me.

Rattlesnakes are a different story!  There is something very primal and unsettling about hearing a the warning of an angry rattlesnake and not knowing where it is.

I encountered the big Western Rattlesnake you see at left while hiking and photographing along the Lower Deschutes River, near its’ confluence with the Columbia River Gorge.

I mention this location because it typifies rattlesnake terrain in Oregon…riparian areas, east of the Cascades and at lower elevations.Western Rattlesnakes have a long period of inactivity during Oregon’s long winters.  Over my two decades of scouting landscape photographs in Oregon, I’ve noticed a distinct pattern in the seasonal emergence of Rattlesnakes in Oregon.  When Balsamroot begin to bloom, Rattlesnakes become active. 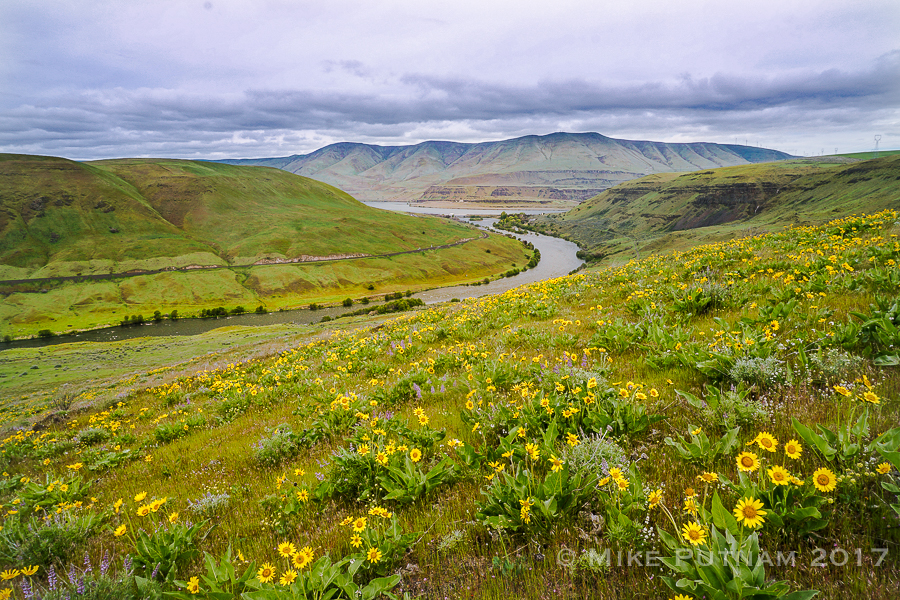 I captured the image you see to the right  on the same morning that I had the run- in with the rattlesnake you see above.  Please notice the large yellow flowers in this image.  They are the aforementioned Balsamroot, whose bloom season seems to correlate quite accurately with the seasonal emergence of Oregon’s Western rattlesnakes.

I was, unwisely, hiking off trail, near the river when I heard the snake’s rattle, warning me to keep my distance.  My stomach dropped as if I’d crested a huge hill in the front car of an amusement park roller-coaster because I couldn’t see the snake.  This non-snake -fearing landscape photographer was terrified!  The snakes natural camouflaged pattern was betraying both of us.  Moments later( seemed like an eternity) I saw the snakes movement.  I shrieked like a frightened child, jump as high as my old knees carrying 45 pounds of camera gear would allow and dashed off!  As my heart rate slowly dropped back to a sustainable level, I could hear the rattlesnake still warning something even though I was well out of threat-range.  I realized my tripod had fallen off of my photography backpack and landed right next to the Western Rattlesnake, who was VERY ANGRY!  Click the link below to see a quick video of the rattlesnake in question.  Please excuse the low video quality from my iPhone shot at long range!

A couple quick notes about this interaction.  I would never knowingly agitate a rattlesnake or any other animal.  This was an accidental encounter and my tripod was the culprit  which raised the snake’s ire.  The Photo of the rattlesnake that you see at the top of this page was shot from a LONG way from the snake.  I would never intentionally get that close to a rattlesnake.  Shortly after I retrieved my tripod, the snake settled and moved on, as did I.

Some Important tips for traveling through Rattlesnake Habitat

1. Stay on established trails!   On well trodden trails, identifying Rattlesnakes is much easier and they choose to avoid heavily traveled terrain.

2.  Wear Boots, the higher the better.

4. Keep your dogs on a lease or better yet, leave them at home.  Dogs tend to be intensely curious about rattlesnakes which leads to trouble.  If you do take your dogs with you in Western Rattlesnake terrain, I highly advise that you first get your dog a series of rattlesnake vaccines.  I have seen several dogs whose lives were saved because they had been previously vaccinated.

5. Be very cognizant of children. They tend to put their hands and feet in places that rattlesnakes spend time.

7. Travel with a friend.

8. If you encounter a rattlesnake, keep your distance.  They are Not aggressive unless provoked, so keeping your distance promotes your safety and theirs.

9. If you see blooming balsamroot flowers, beware, as you might be in active rattlesnake habitat.

Have fun, hike safe, be respectful, be cautious and be aware in Oregon’s rattlesnake terrain!