Recently, Troy McMullin and I ventured to Smith Rock State Park to enjoy the low elevation snow to be found there.  It was the first sunny day in quite some time and we both were happy to get out of the clouds that had been inhabiting Central Oregon.  I am repeatedly amazed at how stunning the Smith Rock area is.  I’m convince that if it was located east of the Mississippi River, it would have been made into a national park long ago.  With its stunning colors, vertical towers the Crooked River flowing around its periphery, and with Gray Butte as a backdrop it is simply an amazing place to visit.  Personally, I think it surpasses anything outside of Utah with its rugged, rocky appeal.  Of course it is world famous for its Rock Climbing and less so for its hiking, mt. biking, and photo opportunities. 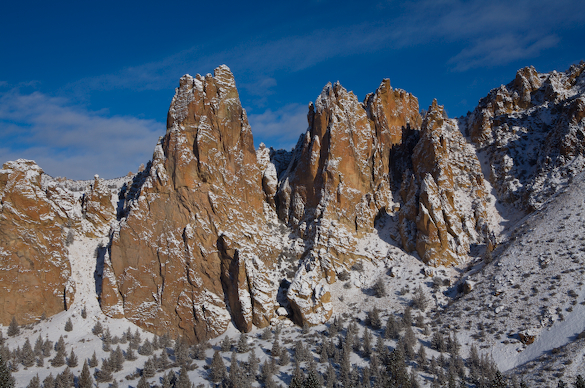 The Monument and snow at Smith Rock State Park

One of the less obvious but very photo worthy rock features at Smith Rock is the Monument.  I’ve always been very fond of this photo location and Troy seemingly has developed something of an obsession with the scene.   Please click the following link to visit Pacific Crest Stock .  It is the stock photography company that Troy and I will be launching shortly after New Years.  In the link included you’ll find some other very nice photos of Smith Rock and the high desert areas of Central and Eastern Oregon.

The snow cover made for some interesting textures and mid range details in our images.  If you or anyone you know visits Smith Rock while it is still snow covered, please be careful.  The snow adds a level of danger to the scene as well as beauty.  The prominent basalt columns along the Crooked River Canyon are especially dangerous when snow covered.  Obviously they are slippery, but many small crevices are now snow covered creating many hidden and potentially dangerous pitfalls.  Be careful if venturing near any cliff edges for photo, climbing, or sight seeing purposes. 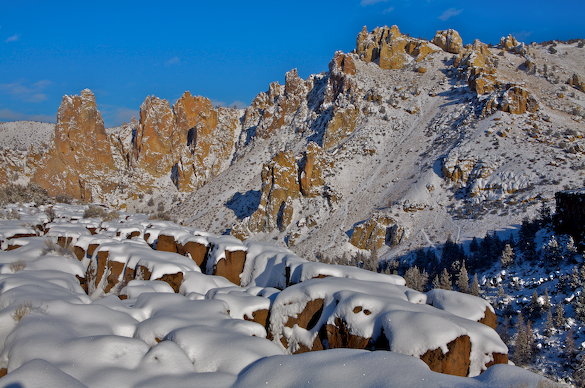 Above is a photo of Smith Rock from high above the Crooked River Canyon featuring some slippery yet attractive snow covered basalt columns in the foreground with some rocky snow covered spires in the background.  The light was not optimal for some areas of the park but the exploring was exceptional and beautiful from every angle, even if photo conditions were slightly less than perfect.  It is rather rare to have this much snow at Smith Rock and blue skies because the snow tends to melt of quickly at that elevation when the sun appears on the scene.  I captured the next photo from an entirely different area of Smith Rock.  This rock formation is to the left after you cross the bridge over the Crooked River.  It has some beautiful pastel hues in its rock formations but is quite dangerous for rock climbing purposes as I’m told that it is rather crumbly. 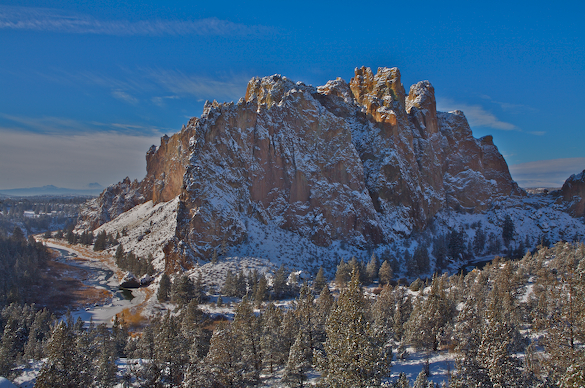 Smith Rock and the frozen Crooked River covered in snow.

One of the surprising things about this photo adventure was how thoroughly the Crooked River was frozen.  The clouds behind this impressive rock formation are a bit disappointing in that they obscure South Sister peaking out to the left side of the rock formation.  I like how the snowy juniper trees frame the bottom of this picture and the curvature of the Crooked River(perhaps this is why it’s called the Crooked River!) emphasizes the shape of the giant rock formation at the south end of Smith Rock.  Finally I’ll include a detail shot of one of my favorite rock formations.  Smith Rock is a wonderland for photos, hiking, biking, and virtually any outdoor activity and I love the big western scenes there.  This being said, perhaps my favorite aspect of Smith Rock State Park is the small details I find upon intimate inspection of this stunning location.   Like so many other spots at Smith Rock, the following photo reveals beauty in its finer details.

I love the varied color palette visible in this picture.  The rust, aqua, and oranges all enlivened by the snowy details on these intricate rock formations.   It is finding perspectives like this that has become my favorite aspect of photography explorations of Smith Rock.

If anybody is interested in a beautiful and snowy perspective of Smith Rock, now is the time for a hike as the snow often does not last long in this area of the high desert of Central Oregon and please be careful near cliff edges as the snowy beauty harbors some seasonal dangers that are best avoided.  Happy Holidays!