I’m excited to share this beautiful new print of Tam McArthur Rim reflected in the glassy waters of Three Creeks Lake, near the city of Sisters Oregon. 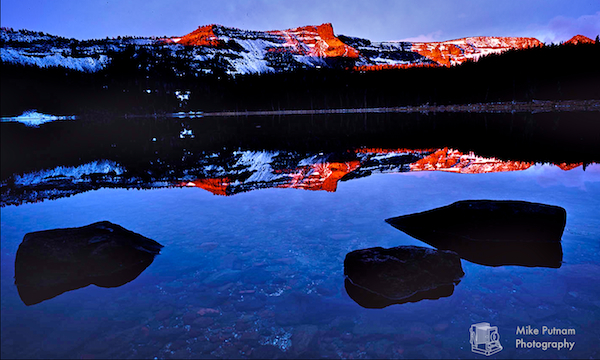 When my wife and I first moved to Oregon, over 15 years ago, we rented a home in the city of Sisters, Oregon.  The city of Sisters, like much of Central Oregon, has amazing recreational opportunities right outside  its doors.  One of my favorite after work activities when I lived in Sisters was to drive up to Three Creeks Lake and climb to the top of the column( seen just right of center in this image) on Tam McArthur Rim.  The view from Tam McArthur Rim is one of the best in Oregon. From this lofty wall, you can see the Three Sisters Mountains, Three Fingered Jack, Mt Washington, Mt. Jefferson as well as Three Creeks Lake far below.  Three Creeks Lake is a beautiful 28 acre lake, located at 6,550 ft of elevation and it has a maximum depth of less than 30 feet.  In the past I have struggled to appropriately honor Three Creeks Lake with my photos.  On this particular morning, I was well prepared.  I had scouted my foreground days before, so I had my photo composition determined well in advance.  What I wasn’t prepared for was the brilliant but brief light show I would experience and capture.  There were bands of clouds off to the east prior to sunset, which usually means no direct light hitting vertical faces, making a dull image.  To my surprise and benefit, the very first light of morning peeked below the clouds, spreading a warm alpenglow on the face of Tam McArthur Rim.  I quickly captured two exposures and within 30 seconds, the light was gone and would not re-appear for nearly 20 minutes, leaving harsh,colder light.  Had I got the shot?  Only two exposures?  I was nervous with anticipation while I waited for the film from my 4×5  film camera to be processed and returned to me.  Fortunately, My first exposure was perfect and I got the shot I was after.  Now I eagerly await the first fine art print of this beautiful image of Tam McArthur Rim and Three Creeks Lake!