While on a recent trail run, with Debbie, I was stunned by the fall color in Shevlin Park, one of the true jewels in Bend’s park system.  I’ve been there hundreds of times before but this time was different.  During our usual Shevlin Park Trail Loop run, I found myself repeatedly stumbling while craning my neck for a better look at the outstanding fall color.  I’ve never witnessed such a display there especially along Tumalo Creek near the far end of the loop trail.  I returned three times specifically for photographic purposes and got better images than ever before from that location.  Below is perhaps my favorite.  I love the flow of the water, the  color is of course excellent, and the fact that I was able to work a couple Ponderosa trees into the composition.  Shevlin Park was thankfully spared from logging and therefore has a wonderful assortment of medium to old growth ponderosa trees.  Including ponderosas in the composition helped capture what Shevlin Park means to me.Purchase this beautiful Print of Shevlin Park 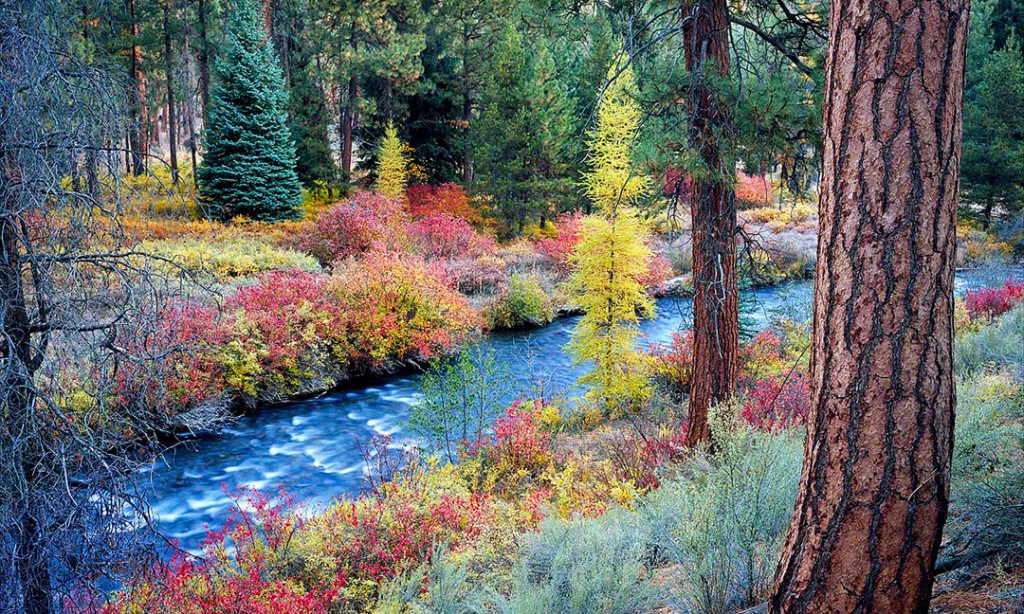 The above image was captured near the up stream end of the Shevlin Park Loop making it a little more than a short stroll to get there.  The next image was taken closer to the park’s parking area.  It shows Larch trees(sometimes referred to as tamarack trees)  in vibrant autumn color framing the distant Tumalo Creek which runs through Shevlin Park.  as many of you know, Larch trees are the only evergreen trees that lose their needles annually.  Is that an oxymoron or what?  Shortly before losing their needles they turn an attractive golden color. 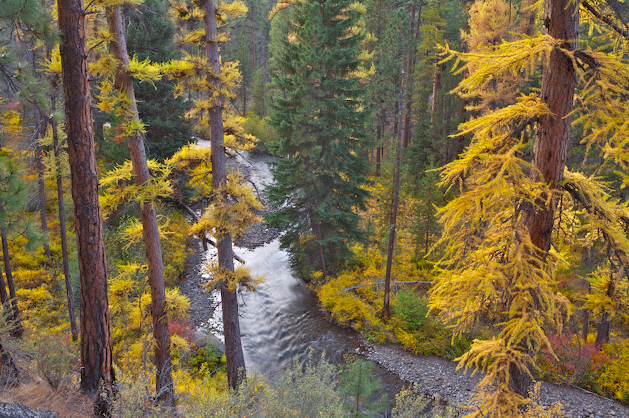 Finally I’ll include a closer image of Tumalo Creek’s atractive flow pattern adorned by autumn color on both of its shores. 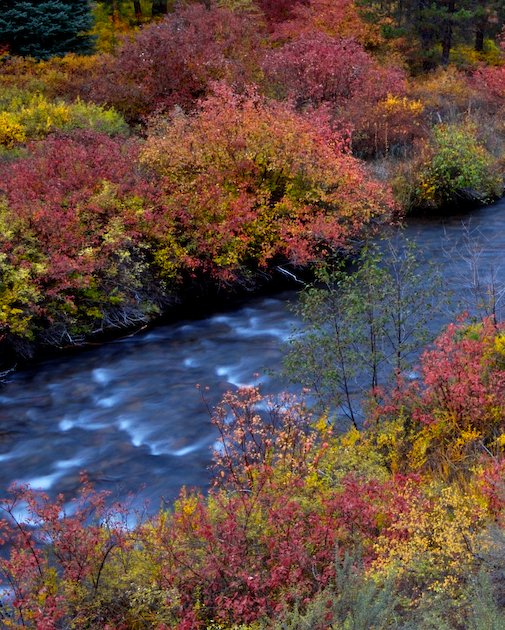 Autumn color along the banks of Shevlin Park’s Tumalo Creek

Hopefully, my large format images from these sessions will turn out as well as the digital versions and I’ll finally make a fine art print that does justice to one of my favorite Bend area locations.  In the future, I hope to give quick accounts of some of my outings so that others can share in beautiful Central Oregon locations at their seasonal best.  If you know of other hikers, trail runners, backpackers or outdoor enthusiasts who would like seasonal trail updates for the Central Oregon area, Please link them to the following website Bend Oregon Hiking.