Some of my favorite photographs have been earned through physical toil and hard work as much as artistry and creativity.  One of these favorites is a shot I captured from the summit of South Sister.  South Sister is normally a long and difficult but not technical climb with a breath taking view as a reward.  Several years ago I became determined to climb South Sister with full camping gear as well as my large format 4×5 camera, sleep on the summit and capture morning’s first light on Middle Sister, North Sister, and the rest of the pacific crest extending northward  to Mt. St. Helen and Mt Rainier in Washington state.  I climbed South Sister three different times with a fourty+ pound pack before finally getting the shot I was after.  One of these climbs I did solo, the next with my friend Jake Bell, and the last with friend Brad Hensley and his sister Lisa.  The shot came out better than I’d imagined, thereby making all the suffering along the way worthwhile.  Below is that shot which I still enjoy, partly because of the work that went into capturing that moment, high in the Three Sisters Wilderness Area. 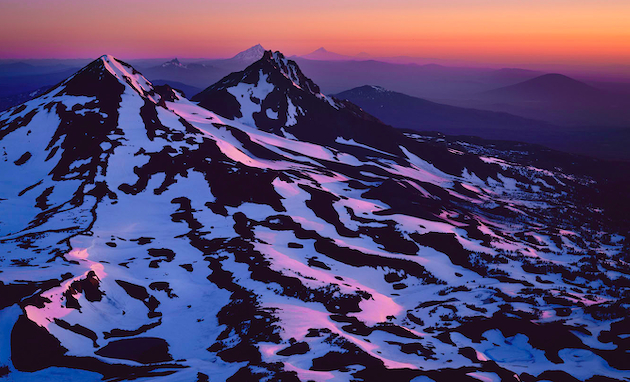 Another one of my favorite Central Oregon locations is the Chambers Lakes area high on the crest between South Sister and Middle Sister. It is visible in the lower right hand area of the image above.   It is a strange and beautiful alpine terrain along with stunning mountain views that makes this area special.  An elusive shot which I’ve obsessed about but has to this day I have not captured includes South Sister reflected in Camp Lake with beautiful alpenglow bathing both of them.  A couple years ago friend and fellow photographer, Troy McMullin and I hiked into this high lakes area in early spring only to find the lakes were frozen solid.  We got some nice shots but not necessarily the ones we were after.  With the recent snows high in the Cascades and a good weather pattern approaching, I decided to revisit the Camp lake area.  I contacted several friends all of whom either knew better or were unavailable.  I decided to go solo!  I loaded camera and overnight gear into my trusty Dana Designs backpack.  Starting pack weight topped out at 63 pounds!  Yikes!  The hike starts at Pole Creek trailhead outside of the city of Sisters.  There were only two other cars there and the weather was pleasant, in the high 40’s.  After October 15th, the hiking season is unofficially over, trails are no longer maintained and trail head signs were covered for the winter.  During the first thirty minutes of hiking I zig-zagged around over thirty down trees blocking the trail.  They were mostly beetle killed lodgepoles so it was no real loss to the forest but an inconvenience for me.  Eventually the lodgepoles thin out as did the down trees.  The trail is 6.5 miles one way to camp Lake and it’s beautiful setting.  About half way to Camp Lake the trail was mostly snowed over and eventually I was post holing nearly every step because of my heavy pack.  By the time I reached the lake, my legs were aching.  My pain was worsened when I reached the lake to find that it was completely frozen over, again!  I was devastated.  the setting was beautiful, as always, but I would clearly not get the shot I had suffered for. 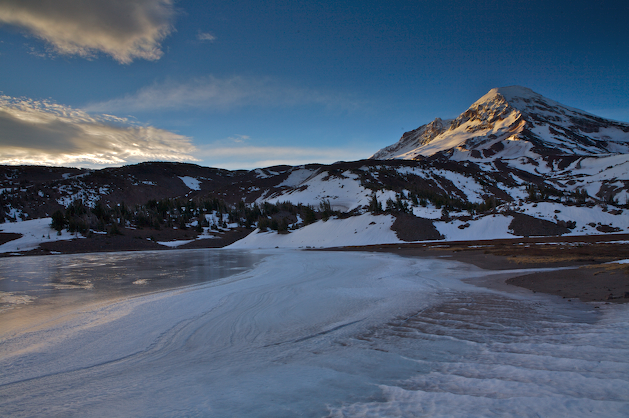 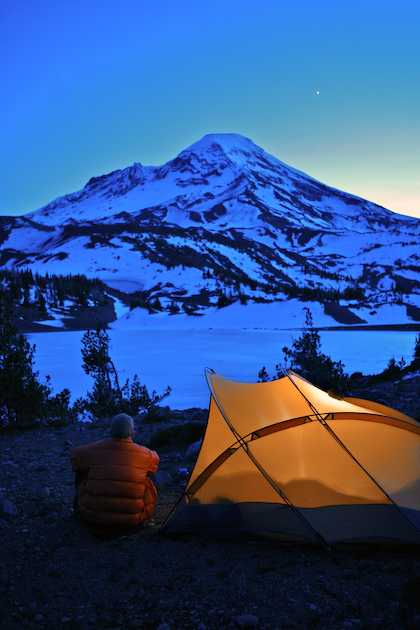 The night was cold but beautiful and my beloved Western Mountaineering sleeping bag kept me cozy. The sunrise offered some alpenglow color and clouds that would not cooperate for a truly great photo. 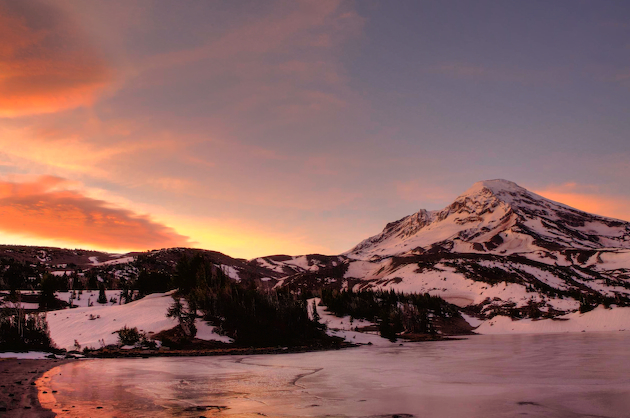 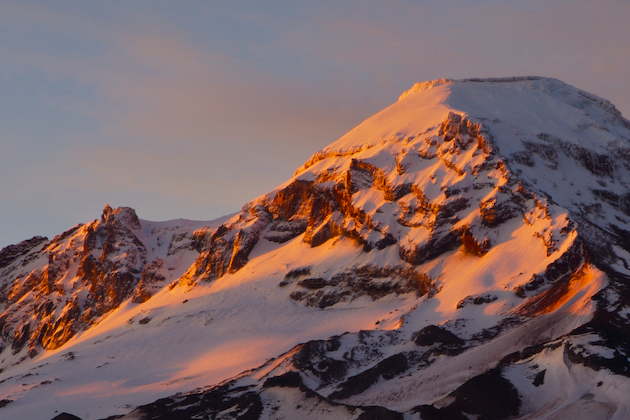 Detail of South Sister at sunrise

As the morning progressed, I snapped a few more photos until the light became too harsh.  I packed up and enjoyed my last few moments alone at Camp Lake(first time I’ve been the only one spending the night there).  The return hike was long but uneventful.  I left having spent a beautiful evening at a phenomenal location but not having gotten the shot I was after.  The good news is that I’ll soon return to this special location and try to capture the elusive reflection shot I’ve been after for years.  If you are like me, you start dreaming about your first civilized meal on the way out of the back country.  For my first meal, I chose to visit my good friends at Three Creeks Brewing Company in Sisters.  Their signature burger was delicious as always.  The Head Brewer, Dave Fleming has recently concocted a phenomenal IPA, call HooDoo VooDoo IPA. An outstandingly aromatic nose leads the way through a wonderfully balanced body and a supple refined finish.  It’s a great beer and definitely worth a try if you are ever exploring in the Sisters area.